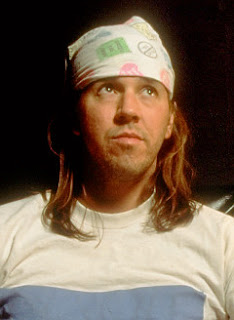 "Fiction is what it is like to be a fucking human being." Interview with Larry McCaffery.


"--and then you're in serious trouble, very serious trouble, and you know it, finally, dead serious trouble, because this substance you thought was your one true friend, that you gave up all for, gladly, for so long gave you relief from your pain of the Losses you love of that relief caused, your mother and lover and God your compadre, has finally removed its smiley-faced mask to reveal centerless eyes and a raving maw , and canines down to here, its the Face In The Floor, the grinning root-white face of your own nightmares, and the face is your own face in the mirror , now, its you..." Infinite jest


"I had a teacher I liked who used to say good fiction's job is to comfort the disturb and disturb the comfortable. I guess a big serious part of serious fiction's purpose is to give the reader, who like all of us is sort of marooned in her own skull, to give her imaginative access to other selves. Since an ineluctable part of a human self is suffering, part of what we humans come to art for is an experience of suffering, necessarily a vicarious experience, more like a generalization of suffering. Does this make sense? We all suffer alone in the real world; true empathy is impossible. But if a piece of fiction can allow us imaginatively to identify with characters pain, we might then also more easily conceive of others identifying with our own. This is nourishing and redemptive; we become less alone inside. It might just be that simple." Interview with Larry Mccaffery 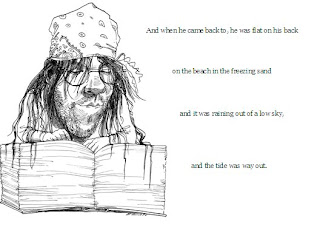 "Fiction writers as a species tend to be oglers. They tend to lurk and to stare, The minute fiction writers stop moving, they start lurking, and stare. They are born watchers. they are viewers. They are the ones in the subway about whose nonchalant stare there is something creepy, somehow. Almost predatory. This is because human situations are writers' food. Fiction writers watch other human sort of the way gapers slow down for car wrecks; they covet a vision of themselves as witnesses."

DFW's 'millenium' comments from December 1999, Rolling Stone "Such as thing as truth":


"We're all-- especially those of us who are educated and have read a lot and have watched TV critically-- in a very self-conscious and sort of worldly and sophisticated time, but also a time when we seem terribly afraid of other people's reactions to us and very desperate to control how people interpret us. Everyone is extremely conscious of manipulating how they come off in the media; they want to structure what they say so that the reader or audience will interpret it in the way that is most favorable to them. What's interesting to me is that this isn't all that new. This was the project of the Sophists in Athens, and this is what Socrates and Plato thought was so completely evil. The Sophists had this idea: Forget this idea of what's true or not-- what you want to do is rhetoric; you want to be able to persuade the audience and have the audience think you're smart and cool. And Socrates and Plato, basically their whole idea is, 'Bullshit. There is such a thing as truth, and it's not all just how to say what you say so that you get a good job or get laid, or whatever it is people think they want.'" 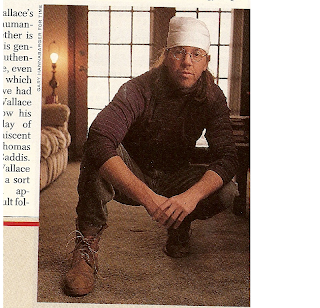 What do you think is uniquely magical about fiction?


"Oh, Lordy, that could take a whole day! Well, the first line of attack for that question is that there is this existential loneliness in the real world. I don't know what you're thinking or what it's like inside you and you don't know what it's like inside me. In fiction I think we can leap over that wall itself in a certain way. But that's just the first level, because the idea of mental or emotional intimacy with a character is a delusion or a contrivance that's set up through art by the writer. There's another level that a piece of fiction is a conversation. There's a relationship set up between the reader and the writer that's very strange and very complicated and hard to talk about. A really great piece of fiction for me may or may not take me away and make me forget that I'm sitting in a chair. There's real commercial stuff can do that, and a riveting plot can do that, but it doesn't make me feel less lonely.


There's a kind of Ah-ha! Somebody at least for a moment feels about something or sees something the way that I do. It doesn't happen all the time. It's these brief flashes or flames, but I get that sometimes. I feel unalone -- intellectually, emotionally, spiritually. I feel human and unalone and that I'm in a deep, significant conversation with another consciousness in fiction and poetry in a way that I don't with other art."

"Victory for the Forces of Democratic Freedom!!!"

"'Don, I'm perfect. I'm so beautiful I drive anyone with a fucking nervous system out of their fucking mind.Once they've seen me they can't think of anything else and don't want to look at anything else and stop carrying out normal responsibilities and believe that if they can only have me right there with them at all times everything will be alright. Everything. Like I'm the solution to their deep slavering need to be jowl to cheek with perfection.'

'Now with the sarcasm.'

'I am so beautiful I am deformed.'" 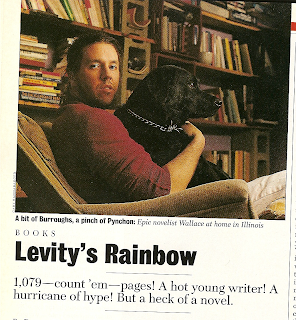 "So what I did was, I went home for a term, planning to play solitaire and stare out my window, whatever you do in a crisis and all of a sudden I found myself writing fiction. My only real experience with fun writing had been on a campus magazine with mark Costello, the guy I later wrote signifying rappers with. But I had experience chasing the click, from all the time spent with proofs. At some point in my reading and writing that fall I discovered the click existed in literature too. It was real lucky that just when I stopped being able to get the click from math logic I started to be able to get it from fiction. The first fictional clicks I discovered where in Donald Bartheleme's, "The Balloon" and in parts of the first story I ever wrote, which has been in my trunk since I finished it. I don't know whether I have much natural talent going for me fiction wise, but I know I can hear the click when there's a click. In Don Delillo's stuff, for example, almost line by line I can hear the click. It may be the only way to describe writers I love. I hear the click in most Nabokov. In Donne, Hopkins, Larkin. In Puig and Cortazar. Puig clicks like a fucking Geiger counter. And none of these people write prose as pretty as Updike, and yet I don't hear the click in Updike."


"THE MAN WHO KNOWS HIS LIMITATIONS HAS NONE."

'Please do. I am right here with my attention completely focused on you."

'How can you tell if somebody's sad?"

"It felt like a sun in his head.....It occured to him that if he died everybody would still exist and go home and eat and X their wife and go to sleep."
--IJ

"And I've found the really tricky discipline to writing is trying to play without getting overcome by by insecurity or vanity or ego. Showing the reader that you are smart or talented or whatever, trying to be liked, integrity issues aside, this stuff just doesn't have enough motivational calories to carry you in the long haul. You've got to discipline yourself that talk out the part of you that loves the thing, loves what you're working on. Maybe that just plain loves." 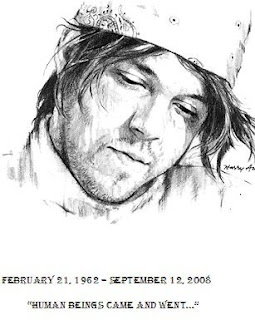 "'I'm not afraid of how this sounds to you. I'm not embarrassed now. But if you could understand, had I--could you see how there was no way I could let her go after this? Why I felt his apical sadness and fear at the thought of her getting her bag and sandals and new age blanket and leaving and laughing when I clutched the hem and begged her not to leave and said I loved her and closing the door gently and going off barefoot down the hall and never seeing her again? Why it didn't matter if she was fluffy or not terribly bright? Nothing else mattered. She had all my attention now. I'd fallen in love with her. I believed she could save me. I know how this sounds, trust me. I know your type and I know what you're bound to ask. Ask it now. This is your chance. I felt she could save me I said. Ask me now. Say it. I stand here naked before you. Judge me, you chilly cunt. You dyke, you bitch, cooze, slut, gash, Happy now? All borne out? Be happy. I don't care. I knew she could. I knew I loved. End of Story.'"
--Brief Interviews with Hideous Men
Posted by David Von Behren at 8:00 PM